Our Winterskills courses are becoming more popular with 7 people signing up to this year's events.

We based ourselves in the Cairngorms as being the most reliable area for snow (although it was a nail-bitingly close call with the snow arriving the day before the clients!)
In fact on the Friday we were reccying the decent snow patches on the Cairngorm plateau having watched the snow disappear the week beforehand!

Day One saw us heading up to Coire Mer  via the Coire Cas ski areas where snow was accumulating in the driving wind. It was a good chance for people to get used to walking on crampons in a safe environment and slope. 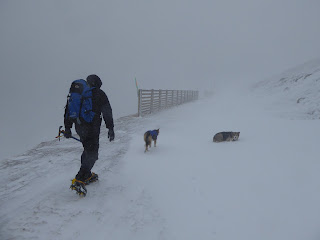 We were able to practice using ice axes to cut steps and look at some impressive snow holes that ML groups had dug. We also bumped into several Mountain Rescue Teams training in  the area including our own, Llanberis MRT and Northumberland and Killin. Everyone was converging on what was one of the best accumulation areas for snow.

Day Two saw us heading into Coire Cas for some unexpected persistent snow (definitely not forecast as can happen in mountain environments). Again we were able to do further practice walking in crampons and cut stepping. We also looked at the Avalanche risk and how it was developing due to wind driven snow. There was time for a little play at ice axe arrests but the slopes which were safe (non-avalanche slopes) were not quite steep enough so we had to improvise. 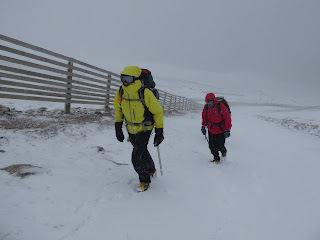 The weather came in unexpectedly with persistent heavy snow around lunch time so we hunkered down in the group shelter for lunch before heading to the summit of Cairngorm. On the way down we played with the avalanche transceivers and did some small searches.

Day 3 was wild; even the Lake District Mountain Rescue dogs headed down to the forests for search training and hardly surprisingly there were not many vehicles in the top car park bar ourselves and an RAF Mountain Rescue team. Valuable lessons were learned in how hard it is to navigate in strong winds, and how exhausting and debilitating strong winds are. (and how puny we are in comparison). At times we experienced full on white out which was a useful experience for everyone. A challenging but rewarding day.


Posted by Snowdonia First Aid at 09:20 No comments: