Steve and I have just returned from a wonderful two weeks of summer weather in Scotland. Even the midges were behaving themselves and leaving us alone. 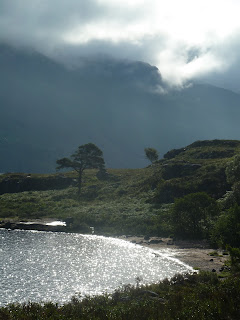 The first two days were more cloudy and wet giving some incredibly atmospheric conditions such as over Loch Maree near Slioch.
After an initial two wet days, the weather changed to British Summer Time or maybe that should be Continental Summer Time.

We climbed two Corbetts in northern Torridon (Ruadh Stac Beag being one of them). The wind was bitter for the first week but that meant walking conditions were ideal. And our boots actually stayed dry! 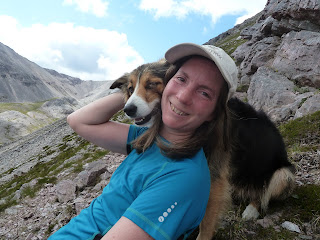 One of the highlights for me was climbing Sgurr Dubh and Sgurr nan Lochan Uaine. I had attempted these two mountains years ago but having parked at the Ling Hut car park and walked to Loch Clair along the road had to retrace my steps when I found the stalkers were in the Glen I was supposed to be ascending. This time we were luckier. Tilly, not so: the curse of Torridonian Rock affected her feet and by the time we had summitted the first peak she had several bleeding nails. 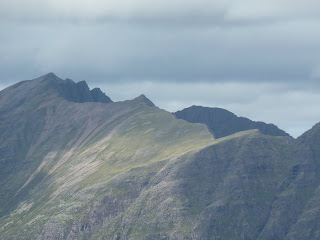 Steve and I had to take it in turns to wait at a tarn with Tilly while the other headed for the second peak alone. 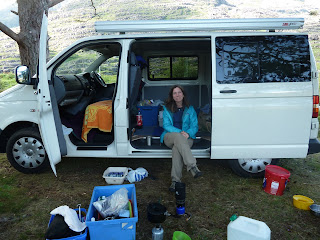 The Van is now on its way into being turned into a camper van although there is still quite a way to go. Having an awning certainly made a huge difference on the few wet days that we had, but I am looking forward to the full conversion with cooker etc inside!
Having had several more days in Torridon which meant that I was able to head up the north end of the Beinn Eighe ridge, we then headed south for Loch Arkaig. 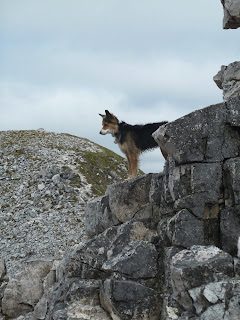 Here we were able to have two more big hill days which both involved two Corbetts a day, and for me one of the highlights was a swim in a mountain pool on the descent of the last day. After a rather hot and sweaty day it was blissful to cool off in the plunge pool of a waterfall; Nature's natural jacuzzi!


Incredibly over two weeks, our boots only got wet on the first two days. From then on it was a pure delight to be able to take off dry socks and boots each night!
Sadly it was then home time; and what a sizzling drive south! However, as I made my way through over 8 loads of washing the rain returned and so put a dampener literally onto the washing which was hanging out on the line to dry overnight!

On Friday, Steve and I took our first MLTA Real Mountain First Aid Workshop. It was a very enjoyable day with a lovely group. We will definitely being taking more in the future.
Posted by Snowdonia First Aid at 08:53 No comments: