The mountains are looking wintery again although the snowline in Snowdonia is rising and falling like a yo-yo. Not quite as consistent as in Scotland or the Lake District. Meanwhile this week is due to be cold (but unfortunately dry which means the Welsh snowline will stay high. See this link from the Met Office. http://metofficenews.wordpress.com/2012/12/07/the-meteorology-behind-the-beast-from-the-east/

Both Scotland and the Lake District have already seen avalanches in the Mountains.

Steve and I should have been in Morocco this last week but unfortunately I have had a savage chest and sinus infection which put pay to my dreams of Mount Toubqal and high altitude this week! I have struggled on the flat!

Our calendar is filling up nicely for 2013. We have a lot of courses advertised so it you are needing a First Aid for the Mountains or Outdoors, of looking for a Mountain Leader or Walking Group Leader Qualification or Training, get in touch.
Posted by Snowdonia First Aid at 02:05 No comments:

In September, Steve and I headed off for a lovely week to the Spanish Pyrenees. It was surprisingly easy to get to; Liverpool to Barcelona, and then hire car to Benasque on wide, quiet Spanish roads.

﻿﻿﻿ The initial heat was a shock to the system after Britain's lack of summer but it didn't last long! The snow came down on the third day.

﻿﻿We spent a few days exploring the Benasque region and climbing some of the lower peaks. The first day we had a gentle break in walking up to the beautiful little tarns of Ibonets des Batisielles.


The next day saw us heading out for the Pico de Alba but with the weather closing in, we settled for the Pico de Paderna above the Refugio de la Reclusa which had several friendly cats, dogs and mules hanging around (and not many people now the main season is over).

Another mountain we climbed was the Pic de Sauvergarde; a lovely moutain with stunning views into France and some exposure and chained sections.

After several days we headed across to the Ordesa National Park; Europe's own limestone Grand Canyon. The classsic walk here is the Faja de Pelay. From the heady heights, you can see across to the famous Breche de Roland.

The wildlife was not too easy to photograph, but we did see vultures, black squirrels, lizards and marmots to name a few.


﻿ The Spanish Pyrenees are a stunning area with challenging walks (although there are some walks in the park, many paths have some degree of exposure and scrambling). I would definitely recomend this area to others looking for an alternative to the Alps. Steve and I certainly plan on a return visit.
Posted by Snowdonia First Aid at 08:20 No comments:

Had a busy few weeks.


For the past two weeks and for the next week I have been keeping my hand in with the Geography world marking Edexcel GCSE papers. I have actually enjoyed the experience which has all been on line (I have changed; before I started I was all for a red pen and paper scripts. I now am definitely converted to the idea of on-line marking which is much quicker and easier, especially in getting feedback on marking standards)


Interspersed with all of this I have had several ML days;

I have been supervising Duke of Edinburgh groups for Kent County Council. I really felt for the students as the weather really was not playing ball. It practically rained from start to finish of their expeditions.


I have also been working on Charity and Challenge events as an ML. Also wet, as well as leading a group along the Nantlle Ridge in pretty foul conditions. Views seem to have become somewhat a rarity!

I also had awet morning with the Llanberis MRT filming with the BBC for an episode of Counryfile which is due to be shown on July 15th.

Posted by Snowdonia First Aid at 02:00 No comments:

Scotland, The Brecons and the Jubilee Beacon

Steve and I headed up to Scotland in late April. We spent five days on Rum reccying it as a Mountain Leader Assessment venue. Stunning place with amazing ridges, sunsets and views. Watch this space for an advertised course there next year.

We then went onto Inverie in Knoydart where we had one mountain day. Our trip was cut short due to me developing terrible abdominal pains the first night we were there. I gritted my teeth to get through the first day but had to give up the following night. I was rushed into the Belford Hospital in Fort William with what turned out to be appendicitis.

My second week of the holiday was spent in hopsital while Steve and Cluanie enjoyed the mountains of Lochaber.

We have just returned from a delightful two days in the Brecons with Dolphin School. We had two mountain walks; Picws Du and Pen y Fan. On the descent from Pen y Fan we passed a sad memorial to a little boy, Tommy Jones who died on the mountain in August 1900 having wandered away from his farm. It took 29 days till his body was found. It shows how busy the mountains have become. Where he was found is on one of the main paths up Pen y Fan. Nowadays he would have been found within a day!

We also stopped at a tarn which plays host to the largest leaches I have ever seen in the UK: 10 cm long and 1 cm wide!

It was then back to Snowdonia for a busy few days with Llanberis Mountain Rescue Team over the Bank Holiday before joining LLMRT and SARDA Wales for a walk up Snowdon last night with Walking With the Wounded to light the Jubilee Beacon at 10.29 pm. An enjoyable and sociable occasion.
Posted by Snowdonia First Aid at 05:29 No comments:

Steve and I have been keeping active with work, rescues and leisure. Steve has been out most of the last week with our ML Assessment group. I went out with them on Thursday into Cwm Glas where only two nights before I had been searching for a missing walker on Snowdon. Steve and the group headed over to the Moelwyns to escape the snow conditions (not needed or wanted for a Summer ML Assessment!). We have also had a REC Level 2 First Aid course in Llanberis and I have been teaching Geography to Bablake School in the mountains of Snowdonia.

I have been kept busy over Easter with a lot of Mountain Rescue callouts and searches. I have also been voted in as Chairman of SARDA Wales at our AGM on Saturday; a great privilege but one that carries a lot of responsibility. You can see what SARDA Wales does at www.sardawales.org.uk/ Time for us both to have a rest!
Posted by Snowdonia First Aid at 08:01 No comments:

Snowdonia has returned to its more usual weather; snow and colder temperatures.

On Monday through till Wednesday I was teaching Geography for Sixth Form Geographers from Bablake School. On Monday we looked at a case study of Flooding in Llanrwst in the Conwy Valley investigating both the causes and the responses to the floods. On Tuesday we headed up to near the source of the Afon Conwy and studied Rivers and then on Wednesday came the day that the students will never forget; a Glaciation day in Cwm Idwal and the Ogwen Valley in full-on winter conditions. The students learnt not only about glacial landforms and processes but I was also able to throw in a few simple Winter skills as well.
For me the irony was that last week when I should have been doing my Winter Mountain Leader Assessment, the course was cancelled due to lack of snow!

Meanwhile, Steve was taking our early April REC Level 2 course which was held at the Heights Hotel in Llanberis.

Next week we have a full complement for our Summer Mountain Leader Assessment. Good luck to all the participants.
Posted by Snowdonia First Aid at 07:06 No comments:

The weather has been absolutely glorious in Snowdonia. Unseasonally hot temperatures have sent Nature crazy with many plants flowering before their time.

For me the warm conditions saw my Winter Mountain Leader Assessment which should have been this week being cancelled. Instead I spent the weekend assessing the Mountain Rescue Search dogs and lying around in a T shirt and summer trousers; a state I have never been able to assess in before (usually I am buried in around 7 layers of clothing desperately trying to keep warm!).

What were lovely conditions for the Assessors were not appreciated by the dogs and handlers up for assessment as they prefer windy, wet and cold which is better for the dogs' scenting abilities.

Both the Saturday and the Sunday's assessing were followed by Mountain Rescue callouts for climbers who had fallen, or in one case, who had his hand jammed in what must be the most secure hand jam ever. Several buckets of ice later and some handy work with a hammer, he was freed!

We ran a REC Level 2 Emergency First Aid course this week, and we are running one next week in Llanberis. Another 2 weeks and we have our Summer Mountain Leader Assessment which is now full.

I enjoyed the last of the sun yesterday with a beautiful walk over the Nantlle Ridge. The weather had certainly changed though, the wind was bitter.
Posted by Snowdonia First Aid at 09:35 No comments:

Steve and I have kept busy with both work, Mountain Rescue callouts and days out.
In February winter conditions in Snowdonia were fantastic (although I'm not sure I would call a wade in waist and thigh deep snow up Banana Gully on Y Garn 'fantastic conditions'! 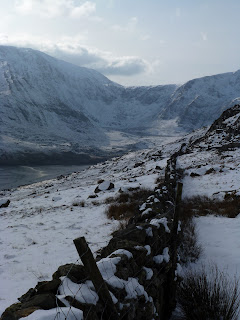 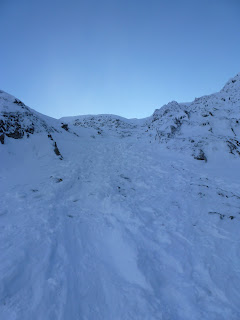 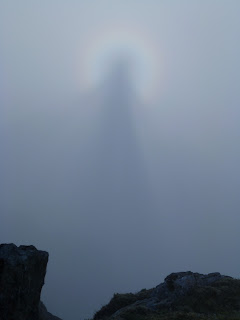 However Hourglass Gully on Pen y Ole Wen and Easy Gully in Cwm Cneifion were definitely on better snow!

I headed up to Scotland at the beginning of March to observe a friend (Rob Johnson MIC) teaching a winter skills course. Snow conditions were variable changing dramatically from day to day but as I returned to Wales it really does feel like Spring has arrived. Yesterday saw the most amazing cloud inversion and brocken spectres in the Glyders.
Posted by Snowdonia First Aid at 09:10 No comments: 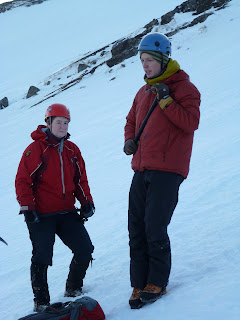